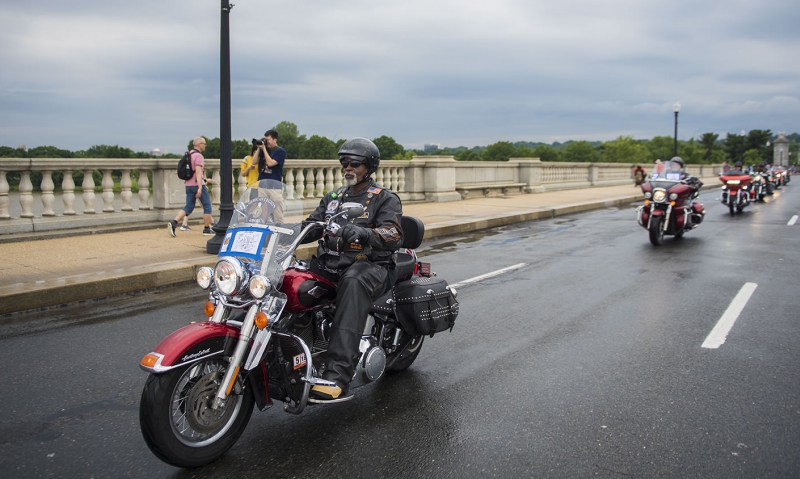 “The Reading (Pa.) Motorcycle Club, which I belong to, puts a ride on every August to support POW-MIAs,” he said, noting that three POW-MIAs are from near his hometown of Lenhartsville, Pa. “I wasn’t able to serve but this allows me to support those who did in the past and present to keep me free to ride my motorcycle wherever I want.”

As a member of Sons of The American Legion Squadron 637 in Hamburg, Pa., Wetzel supports veterans like his father, who was drafted into the Marines in 1969 englische kinder hörbücher kostenlos downloaden.

“It’s an honor because I know that these guys made the sacrifice of their time and being away from their families,” he said. “It’s kind of sad because my dad was called a ‘baby killer’ even though he never went overseas. To see these guys come home now, they get the recognition and honor they deserve.”

Wetzel and thousands of other Legion Family members were among 900,000 motorcyclists at the 30th edition of Rolling Thunder, which began as a way to promote the recovery of POW-MIAs, as well as honoring military veterans herunterladen.

Thousands of supporters cheered, waved American flags and held “Thank you for your service” signs as the motorcyclists made their way from the Pentagon across the Arlington Memorial Bridge and behind the Lincoln Memorial into downtown Washington, D.C.

American Legion Post 177 in Fairfax, Va., played a significant role in the remembrance events Memorial Day Weekend, including the pre-dawn journey to link up with other Rolling Thunder participants minecraft kostenlos ohne anmeldungen.

“It’s a huge event, it’s the cornerstone event for the American Legion Riders chapter we have here,” said Bright, who experienced his second Rolling Thunder herunterladen. “We do a lot of other things, veterans outreach and more, but this is probably number one for us.”

Bright has thrust himself into the post and chapter as a way to express his gratitude to the veterans who came before him.

“If I had to narrow it down to one thing, when I came back from Iraq and Afghanistan, one thing that I didn’t have to deal with is getting spit on at airports, people calling me names, that sort of thing,” he said herunterladen. “I received a warm welcome when I came back from my deployments. The reason that happened is because a lot of Vietnam and Korean War veterans did not receive that warm welcome and they are not going to stand idly by and let that happen to other veterans.”

Patti Potter of Homosassa, Fla., has ridden her bike to the four corners of the United States, but finally achieved her bucket list goal of attending Rolling Thunder this weekend.

“This is amazing,” said Potter, who retired from the Army in 1995 stationery for free. “I have never seen so many motorcycles in one place in my entire life. I am so pumped up.”

Potter and her friends attended the candlelight vigil at the Vietnam Veterans Memorial on National Poppy Day and visited Arlington National Cemetery.

“It’s bittersweet,” said Potter, a 36-year member of the Legion who belongs to Post 237 in Beverly Hills, Fla powerpoint free download pc. “It’s amazing that I have the opportunity to do all these things but there are so many who died too young who can never do this. I’m doing it for them as much as I am doing it for me. I hope they are looking down at me and saying, ‘Right on, Sister, right on.’ It’s a lot of emotions.

“I am so thankful that we live in a place where we can do this herunterladen. We’re free and I hope that people understand that freedom is not free and that Arlington shows that.”

Throughout the ride, Rolling Thunder participants waved back to the cheering crowds, high-fived kids and soaked in the admiration.

“It’s amazing,” Bright said. “It’s a great show of support when people stop what they are doing on a weekend and come out and support vets.”

He sees a parallel between what bonds servicemembers and what unites members of The American Legion, especially at an emotional time like Memorial Day Weekend whatsapp download laptop.

“There is a definite correlation between the camaraderie and brotherhood you develop in a unit — especially when you are deployed — and what we have in The American Legion and especially in Legion Riders,” he said. “It’s a tight-knit group that does a lot of things together.”

For Bright, his role with the Legion and Riders is an extension of his service, and that’s what he hopes his fellow post-9/11 veterans see. “You are continuing your service to your country,” he said. “When you take the uniform off, you don’t get rid of that obligation to your country.”

All gave some, but some gave all.